As stated previously in “Following Joseph” Joseph Dunagan was given a Land Warrant for 200 acres of land in Franklin County Georgia. The order was given on February 6, 1792 and on January 1, 1793 he received the warrant. His brother Thomas received a warrant for 100 acres in Franklin County Georgia. The date on this warrant is written 23 January but the year is missing.
We also find land warrants issued in Hall County Georgia to Benjamin Dunagan and Isaiah Dunagan. Benjamin was given 250 acres in East Hall County near the North Oconee River 3 May 1853. Isaiah’s warrant was dated 4 July 1854 but the acreage is unreadable.
Posted in Dunagan Family History and Genealogy | Tagged Dunagan Family History and Genealogy | 2 Comments

A Letter From James Reid Dunagan to R C Wood 1895

James Reid Dunagan was the youngest son of Ezekiel and Lydia Ann Brown Dunagan. He was born March 21, 1821 in east Hall County, Georgia. He lived on the land that his grandfather and father had settled in the late 1790’s and it was there that he died on May 22, 1900. He is buried at Dunagan Chapel’s, a church he helped establish.  The land was donated for the building of Dunagan’s Chapel and a community school. Dunagan’s Chapel has remained a thriving viable church since 1889.  Many of James’s descendants remain on this land today. It is because on his branch that much of our history has been passed on to us. I am counting on the James Reid Dunagan descendants to help us learn more about their progenitor.

The following is a transcription of a letter found in “The Wood Family Papers”.

Dunagan
Georgia
July the 10th 1895
Mr. R C WOOD dear sir
by the request of Mr. WELCHEL I write you a few lines he stated that you wanted to
no what had becom of all the BUFFINGTONs and MARTINs and DUNAGANs the
Old set of the DUNAGANs is all Ded except my self & cister BETSEY EBERHART
BRO JEF & cister JANE McCLESKEY is living yet they ar in Texas the balance of
them is ded to I have heard the Old set of the BUFFENGTONs is all dead & a number
of the yonge set is dead WILLIAM BUFFINGTON & several of his family is
dead his wife dide be fore he did TOM & BERRIAN & JOHN ar living on the old
place yet last monday we buried old Mrs LANGFORD I think she was a bout 88 year
old JONATHAN MARTON & JOHN MARTIN & PINCKNEY MARTIN & Old Squr
SPENCER MARTIN & his Brother JON ar all dead all the Old set of GILMERs is
dead Little Bull as he is cawld is living yet his wife dide a bout 10 days ago Uncle
MOSE BRYAND and wife is ded WM BRYANT & BEN BRYANT is dead AMES
BRYANT is living yet he is a bout 85 years old and his wife is living yet old man
LEWIS JONES & JACEY MORRIS and their wives ar all dead in fact all the old cittersons
that was living hear when you left is dead. DAVID MARTIN & ELISHA WILLIAMS
ar both living yet thrue the Murcy of the good Lord I have been speard. I am
now turnd in my 75th year I have good helth EVALINE my wifes helth is not very
good I was glad to hear from Mr WELCHEL that you was living. you write to me
and if there is any thin perticuler you want no I write it to you I have one daughter
living in Ala MARGARETT WATS__ they live in Jackson County Ala. I have 9 mor
children close round me all groan and all married but 3. I dont no what else to
write to you so I will close if we never meat on earth I expect to meat you in Heaven
your Truley
Jas. R. Dunagan
P. S. Durect you leters to
Dunagan
Georgia
Hall County
[Jef – possibly Thomas Jefferson McCluskey b 1833, son of Isabella Rhea McCleskey McCluskey & Miles
McCluskey]

A D Dunagan Family Bible Records (Certificate of Authenticity)
The above file contains photo images of the Bible Records of Alfred Doster Dunagan, who was the son of James Reid Dunagan and grandson of Ezekiel and Lydia Ann Brown Dunagan. I received the authenticated records from the Georgia State Archives. Susan Dunagan Martin brought this Bible to our first Dunagan Family Reunion. The above photo is the one I took of that Bible. Click on Certificate of Authenticity to see the records.

Joseph Dunagan was born the son of Thomas and Sarah Dunagan in Orange County North Carolina in or around the year 1740. The summation of my research. is as follows:

According to George Dunagan, whose researches I trust more than anyone else, Thomas and Sarah Came to America in the 1730’s, they bought land in Orange County North Carolina in 1748. It is in Orange County, North Carolina that Joseph was born. There is record of Joseph serving on the Grand Jury at Hillsboro in 1763. George said that in “the same year he was known to be in South Carolina looking for a place to settle”. He purchased 150 acres on the Pendleton side of the Saluda River in 1768 and in 1769 he purchased another 150 acres adjoining his land. George said, “This is where he raised his family”. So this must be the birthplace of Ezekiel.

George does make mention of the Dunagan’s in Surry County as being an ‘Uncle John’ (not the same as John, the brother of this Joseph) whose son John Jr and of David who was his brother John’s son. He wrote in his notes that Joseph, Joshua, and Thomas served in the Continental Army during the American Revolutionary War. I have found Revolutionary War Records for Joseph’s brothers, however, I have not found them for Joseph.

I have found Joseph listed in 1790 census in Pendleton South Carolina. Listed in the house were 3 males under 16 and 2 over 16 and 4 females. We know that he did have at least 6 sons and 3 or more daughters but the daughter’s names are not known. I also have record of Joseph Dunagin in the U.S. Census Reconstructed Records for Franklin County Georgia, for the residence year of 1790, however household remarks on the record has a date listed for a petition given by the Governor as 11 November 1793. He must have first come into Georgia in 1790 since we find him listed in both censuses.

We know that he and others applied for land grants. Records, authenticated by the Georgia State Archives, prove that an order was given on 6 February 1792 to give Joseph Dunagan head rights for 200 acres in Franklin County, Georgia. He was given the land warrant on 1 January 1793. His brother Thomas was also given 100 acres in Franklin County, Georgia.

Next we find records indicating that a general order was given by Major General Elijah Clark that a Block House be erected on the Dunagan land near the Currahee Mountain dated 2 January 1793. Again we find records concerning the building of the Block House dated 30 April 1794. Then in the years of 1800, 1802, 1803, we find Joseph Dunagan in the Franklin County Georgia tax census. Another record is found in 1807 for J Dunnigan. Often the name is spelled ‘Dunnigan’ throughout the census.

It is said the Joseph traveled to Tennessee where he spent some time before traveling on to Madison County, Illinois to visit his sons Isaiah and Ande who had moved there from Georgia. George said “It is said he traveled some west of the Mississippi River. He left Georgia in the early part of 1805 but died in the latter part and was buried across the river from St. Louis, Missouri in St. Clair County, Illinois.”

So perhaps the J. Dunnigan of the 1807 census is not Joseph Dunagan, which means that he is last documented in Georgia in 1803.

The Grave Site of Ezekiel and Lydia Ann Brown Dunagan 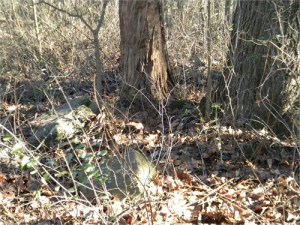 This is the way the grave looked before the new grave marker was placed. As you can see there are two stones in the brambles, those were all that remained of the original tombstones.

Ezekiel Dunagan is my fourth great-grandfather. Ezekiel was born in 1770, according to family Bible records, in Pendleton, South Carolina. His father Joseph was given a land grant for 200 acres near the Curahee Mountain in Georgia and it is then that the first Dunagan’s came into Georgia. Later Joseph along with his brother Joshua Dunagan, incorrectly transcribed in some Hall County records as ‘Joshua Darnigan’, lead the first group of settlers into what is now known as east Hall County Georgia. They were followed by Ezekiel and his brother leading the second group of settlers to the Joshua Dunagan’s settlement. After Joshua’s death, it became known as the Joseph Dunagan settlement. It is in the same area that we find the grave of Ezekiel and Lydia. Through the years, nature had taken over the cemetery and many graves have been lost. Thanks to those Dunagan’s who still live on the land that Ezekiel owned, we never lost the location of his grave site. It was a long time dream of mine to restore and mark the graves of my grandparents for present and future generations. Along with my cousins, we made this possible. The new tombstone was recently placed on the site. Thanks to each of you who contributed your time and money to make this possible.